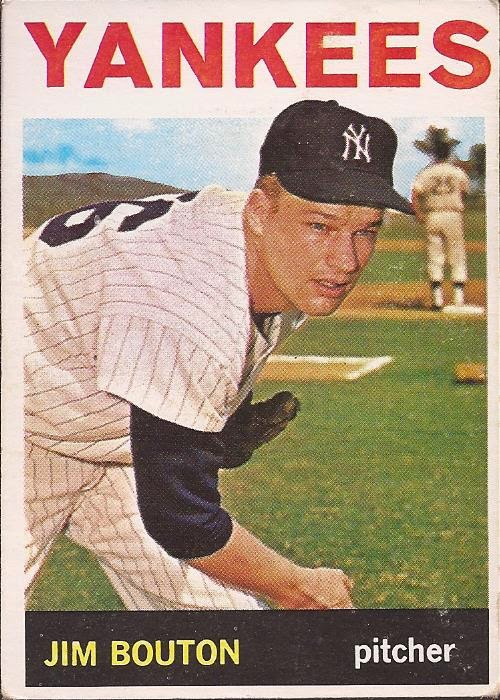 Jim Bouton's career spanned 10 seasons in the big leagues. After riding the bench for his time in high school, Bouton, however, secured a professional contract after a couple seasons of collegiate pitching. After a couple of seasons in the minors, Jim was called up to the Yankees at the start of the 1962 season, appearing in 36 games, starting 16 and finishing the year 7-7. He won a World Series ring in 1962, though he failed to pitch in any games during the series. 1963 and '64 were his most successful seasons, going 21-7 and 18-13 respectively. His '63 season earned him a spot on that season's All Star roster.

However, his large number of appearances in those first years led to arm issues. By 1965, Jim was a member of the bullpen, his fastball noticeably slower. He developed a knuckle ball to extend his career. By 1968, however, Bouton was back in the minors.

It was in 1968 that a friend and broadcaster, Leonard Shecter, approached Bouton about writing a book documenting a season in the majors. Bouton had already been taking notes during the '68 season having a similar idea, and agreed to the project.

The famous book Ball Four was released in 1970 and it detailed the 1969 season Bouton spent with the one year club Seattle Pilots, and some of his time spent with the Houston Astros at the end of 1969. Bouton spoke frankly about the exploits of fellow major league players, and recounted much of his baseball career with the Yankee. As expected, many ball players were not pleased with such an open account of the behind the scenes activity of the ball club members. Bouton was shunned by many major league players and was basically blacklisted from baseball. After being sent down to the Astros farm team in 1970, Bouton immediately retired. He became a sportscaster in New York and did a small amount of acting.

In 1975, Bouton attempted a comeback to MLB, starting with a successful minor league stint in Portland. Bill Veeck, never one to pass on anything that could bring entertainment to baseball, singed Jim to a minor league contract. He went winless with the Sox farm team, and eventually ended up back in Portland. However, Ted Turner of the Atlanta Braves, offered Jim a contract in 1978. After a year with Savannah, Bouton returned to the bigs late in 1979, going 1-3 in 5 starts.

Though Bouton made it back for a short time, he was still alienated from MLB because of his book. He was never invited to any functions, and was always absent from any Yankee honors of former players. However, after the tragic death of his daughter, Bouton' son penned an impassioned letter to the Yankees about his father's exclusion from the Yankees. After public pressure, Jim was invited back to Yankee Stadium in July 1998.

Claim to fame: While it is hard to think of Bouton and not immediately think of his books concerning baseball, Bouton shows up daily on ball fields across America each time a younger pushes some shredded gum into his mouth. Bouton helped invent Big League Chew. 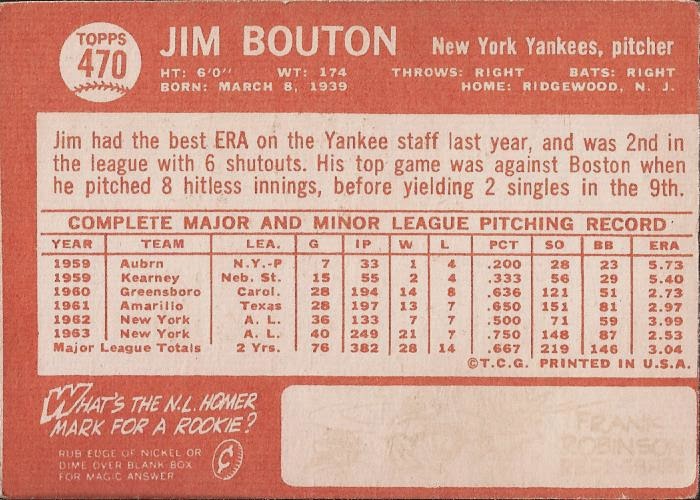 Card Condition: Off center. Slight rounding of the corners and small creases. Off center on the back and some dirt.
Posted by JediJeff at 6:40 PM

JediJeff
I'm a guy. I collect stuff. I work. I'm funny. Three out of 4 ain't too shabby.